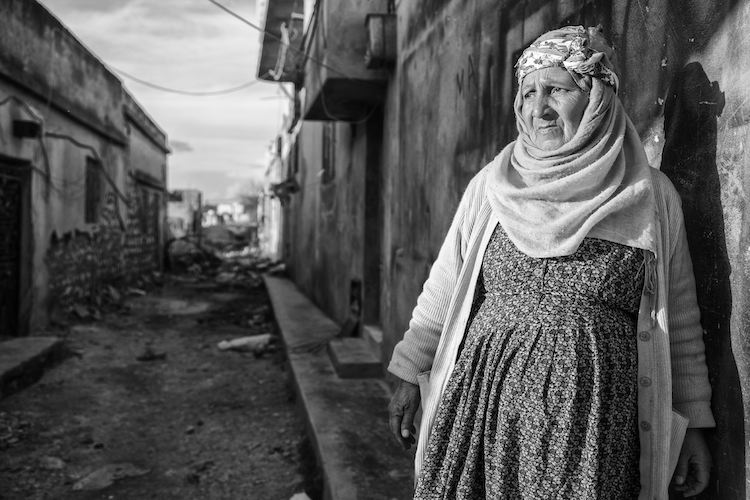 As we discussed how the travel restrictions over the last few years have resulted in an influx of local photographers capturing the magic and details of their hometown, Kate notes a few images in particular that have stayed with her.

“An example comes to mind in Shaown Chowdhury’s work,” she told us. “He was Highly Commended in our Climate Change Main Award in 2021. I really liked his images as I thought that they were honest and open about how people are living with the acute impact of climate change in Bangladesh."

“There’s an image where people are queuing inside standing on chairs as the room is flooded up to thigh height. Moving to the next chair as they get closer to the counter. It made me think, when places in the UK (where i live) flood, all efforts are focussed on evacuating people, getting rid of the water, repairing the damage. Life, to a certain extent, can stand still as we have the means and infrastructure to respond relatively quickly (although the damage to homes and businesses are devastating and often take a long time to repair). But in Bangladesh, it’s a regular occurrence, life must go on, and chores, travel and business must continue in flooded conditions.”

“Simon Murphy’s ‘Govenhill’ is another good example of a photographer not only documenting the diverse population from an area of his home town, but encouraging people to visit Govenhill and change their preconceived ideas about the town."

“It’s a really great project that shows the photographer has an intimate understanding of the place and people they are photographing, but also a desire to use his photographs to, in Simon’s words, ‘trigger thoughts in people’s minds that can plant the seeds for change.”

As a photographer, immersing yourself in the local community you’re aiming to document is absolutely crucial if you’re going to end up with natural, candid imagery of a community who knows and trusts you so much that you blend in. Photographer Glauco Canalis told us how he does this, and here Kate Sedwell explains how she can tell that a photographer has truly committed themselves to integrating respectfully.

“If we take Tamara Reynolds’ series of images ‘The Drake’ - a story of people who are on the outskirts of society, struggling, surviving day to day - it forces us to look at people that, if you live in cities, you see everyday, but remain marginalized and unseen,” said Kate.

“You can see from these images that the people were both comfortable with Tamara taking their picture and telling their story, but also that there is a familiarity with the experience in the selection of work submitted. I had the pleasure of interviewing Tamara, and she told me not only that she had been documenting ‘The Drake’ series for 4 years, but also empathized with her subjects through her own battle with alcohol addiction. Having been sober since 2002 she said that she ‘could understand the cycle of despair and the lies that you tell yourself that keeps you in the cycle of addiction. How you keep lowering the bar to keep that one thing you believe is  keeping you alive, but it’s actually killing you’.”

Kate went on to say that the photographs that really make an impression on her and the team are the images that tell a story.

“Maryam Ashrafi’s work ‘Rising amongst the ruins, dancing amid the bullets’ which was awarded third place in Faces of Humanity last year was of instant interest to me,” she told us.

“Documenting the consequences of war and the lives of civilians returning to their homes in Northern Syria and the autonomous Kurdistan region of Northern Iraq, I thought that Maryam captured a range of emotions and experiences of these people and the devastation and loss they had experienced from this conflict."

"Showing the level of destruction and how people are having to adapt to live their everyday lives amongst the rubble, the loss of life and love, the resilience and perseverance of those remaining and the persistence of life and the young with communities enjoying being together (even in the most horrible of circumstances), I had so many thoughts and emotions."

“I instantly felt a connection to the story and it made me care about those people. To me, this is what the BarTur Photo Award is about. Highlighting serious problems from a unique perspective, that is different from existing perspectives we can have, and making people care. If people care, then hopefully they will act.”

When you’re documenting your local surroundings, it’s easy to think that what you’re seeing won’t be of interest to others, because it might have become mundane to you. Our daily lives may seem unremarkable to ourselves, but for others across the world, they’re a peek into a life they don’t know.

“We had a really great submission from Enda Burke who took photos of his parents using ‘humor, nostalgia and Catholic iconography’ as a means of escapism. Enda captured the mundane that everyone was feeling - but executed in such a brilliant way that it made me smile,” said Kate.

“It showed everything we were all going through at one point in the pandemic. You could empathize with the scenarios  - cutting your husband’s hair when you haven’t been a hairdresser since you were 7 working on your Girls World doll, trying to exercise at home watching fitness videos whilst eating a freshly delivered McDonalds, and returning to the old school method of catching up with your friends - calling them on the phone! This light-hearted observation of the mundane delivered in such a colorful and humorous way really cheered me up.”

While our Localised Perspectives brief is now closed, the EyeEm Marketplace remains open and ready to sell your photography. It’s so important that the world sees real representations of eachothers lives, hometowns and ways of living. The world needs genuine imagery that cuts through the staged, stuffy stock photography it’s become used to.

We hope this insight from Kate Sedwell helps you to focus your localised photography and to be able to share your perspective with the world.